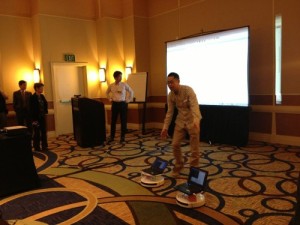 I’m in the Robotics group meeting at OMG this week. My aim is to share with knowledgeable people our first result of a case study of applying SysML to Robotics field. And also showing beta of Astah SysML modeling tool.

OMG already has a Robotics Component standard named  “RTC”(Robot Technology Component). And of course, “SysML” is a Systems Modeling Language also standardized by OMG. So we thought that it was natural to use SysML as a modeling language for RTC-based systems.

Here’s the slides that includes a lot of example SysML diagrams.

Using SysML in a RTC-based Robotics Application : a case study with a demo from Kenji Hiranabe

We used “Roomba” and “Kinect” to demonstrate our experiment. We showed a demo in the talk.

We have worked with “AIST” team and “Honda R&D” team for the last half year to see how SysML can express system level analysis and design and if OpenRTM(Open Robot Technology Middleware) can be used as an interface to implement an application across platforms.

And Sekiya-san also talked about Honda R&D’s strategy toward model-based development and announced a new RTM made by Honda R&D. We also demonstrated two implementations of RTM(OpenRTM-aist and Honda R&D RTM) working interoperably via a demo using “kinect” and “Roomba”.

If you are interested in SysML edition of astah, you can download a beta evaluation version from here. http://astah.net/editions/sysml