There are many ways to use the Git, but there are only 8 simple core models that consist of Git’s foundation. Without understanding this model, you may not be able to use the Git as you are supposed to. I hear “Git is not easy, but in my opinion, those people are not understanding Git’s model. It is actually very simple, so I will explain the core models that consist of Git and relations between objects related to Git’s basic commands.

You can take apart the basic concepts of Git into these two:

This is the model of these basic core concepts and relations between them.

Git has so many features to offer, but these are the only core models and objects based on these concepts are working together. 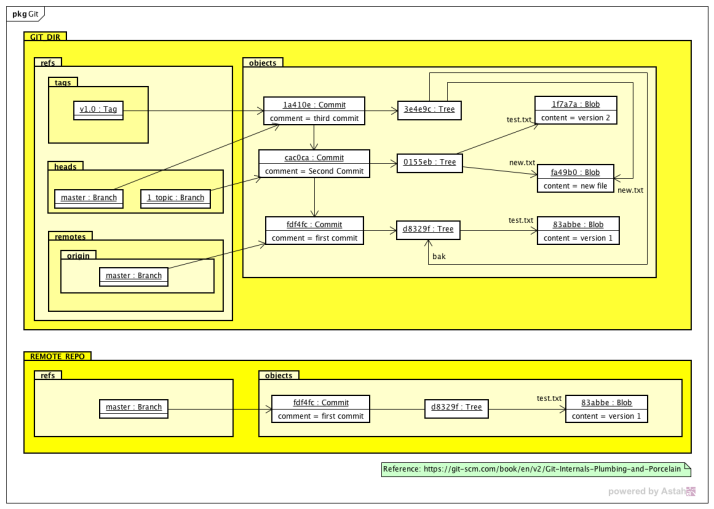 Git really gives meaning to each object by its filenames and directories. I made models about 4 frequently-used commands in Git, clone, fetch, push and pull.

When you run the command clone, it gets GitObject and Reference from the specified remote repository and creates master branch in the local branch.

When you run the command fetch, it gets GitObject and Reference from specified remote repository. It only updates the remote branch in the local repository. The local branch itself will not be updated. 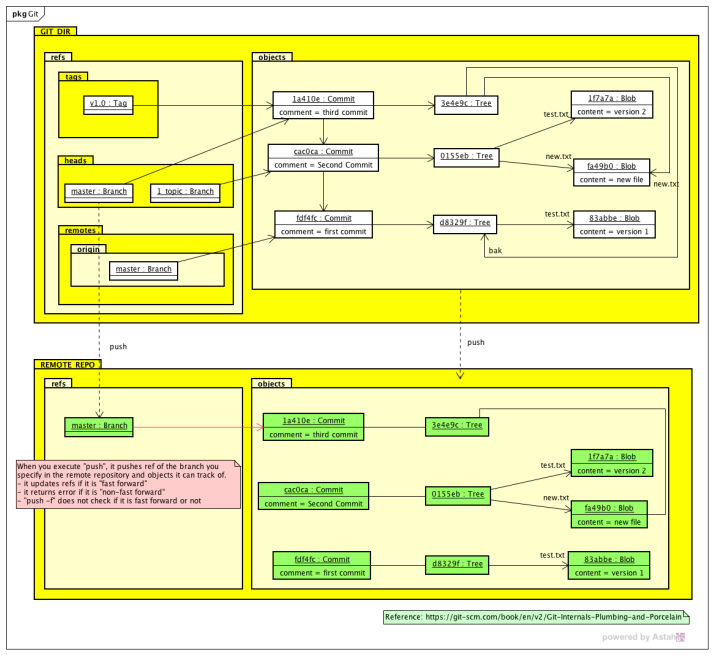 When you run the command push, it sends GitObject and Reference to the specified remote repository. If it is not the fast forward push with remote repository’s branch and local, it returns an error. push -f will skip the check if it is the fast forward or not. When you specify the branch, it pushes it and also GitObject that is related to the branch. 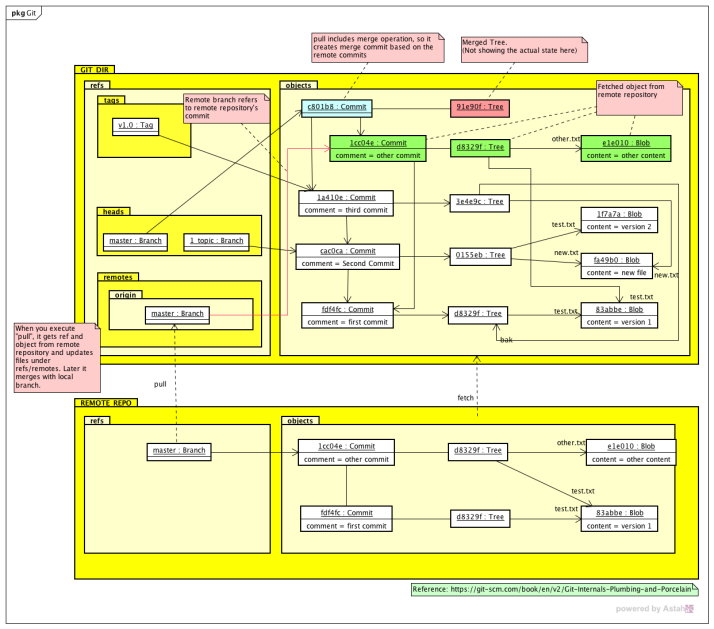 When you run the command pull, it gets GitObject and Reference from specified remote repository and then merges the remote branch to the local.

Repository setting is configured in the .git/config. When you open it, it should show as below.

In this sample, it is defined as below:

You can find it around [core]. You can see this is created as non-bare repository from bare = false.

Name and URL of remote repository

You can find it around [remote "origin"]. URL of the remote repository named origin is git@github.com:ChangeVision/astah.git and fetch target is +refs/heads/*:refs/remotes/origin/*.

You can find it around [ branch "master"]. Upstream of master branch is set as origin‘s refs/heads/master.

So this was my brief explanation about Git’s core concepts. Hope you find that Git is actually simple.
I believe modeling helps to visualize and understand the relations of concepts in the system that are hard to find clearly just by reading the documents.

How about you try modeling the concepts of any tools you are using? It will help you understand the system deeper and find the better way to make a use of the system!

I used Astah to create these diagrams.
If you want to view diagrams and directly edit, you can download the file from here and open it using Astah (Free version Astah Community or 50-day free trial of Astah Professional edition).

One thought on “Git Data Model”